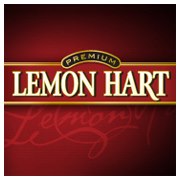 „In the late 18th century, Mr. Lehman („Lemon“) Hart was appointed as the first official purveyor of rum to the Royal Navy and subsequently established the Lemon Hart Rum Company in London, England in 1804.

Lemon Hart’s signature rum blend that he supplied to the Royal Navy was from the colony of Demerara, sourced exclusively from the Caribbean country of Guyana, as it still is today. Casks of the finest aged rums were brought across the high seas from the Caribbean, to be blended into a rare and magnificent premium product that still remains, over two centuries later, an honour to Lemon Hart’s name.

Savour the incredible complexity of flavours and smooth taste Demerara rums make once masterfully blended and crafted into a premium spirit that has honoured Mr. Hart’s passion and name for over two centuries.“