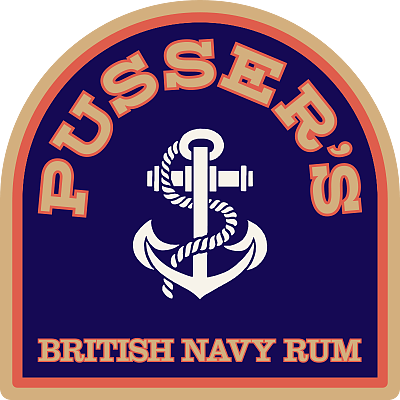 Pusser’s Rum is the only authentic and original Royal Navy rum created according to British Navy specifications. From the 17th century onwards, the Royal Navy issued daily rum rations on board ships, known as “tot”. The sailor responsible for dispensing the daily rum ration was called a “purser”, better known among sailors as a “pusser”. The pusser was often suspected of watering down the precious rum. To prove otherwise, he mixed a few grains of gunpowder into the rum and tried to ignite it. If the rum ignited, it was considered “at proof”, that is, unadulterated. If not, the pusser found himself at the bottom of the sea sooner than he would have liked!

The popular tradition of the daily tot lasted for over 300 years until 31 July 1970, now known as Black Tot Day. On this day, the British Navy ended the daily tote and distributed the last ration of rum.

The ingredients of Pusser’s Rum come exclusively from stills in Guyana. The molasses comes from the Demerara Valley, known as “The Valley of Navy Rum”. Pusser’s Rum is strongly influenced by the flavours of the Port Mourant – Double Wooden Pot Still, which first went into production in 1732. The “greenheart” staves of these historic pot stills have absorbed aromatics for decades and offer a flavour character that cannot be matched by mass-produced rums from metallic column stills.