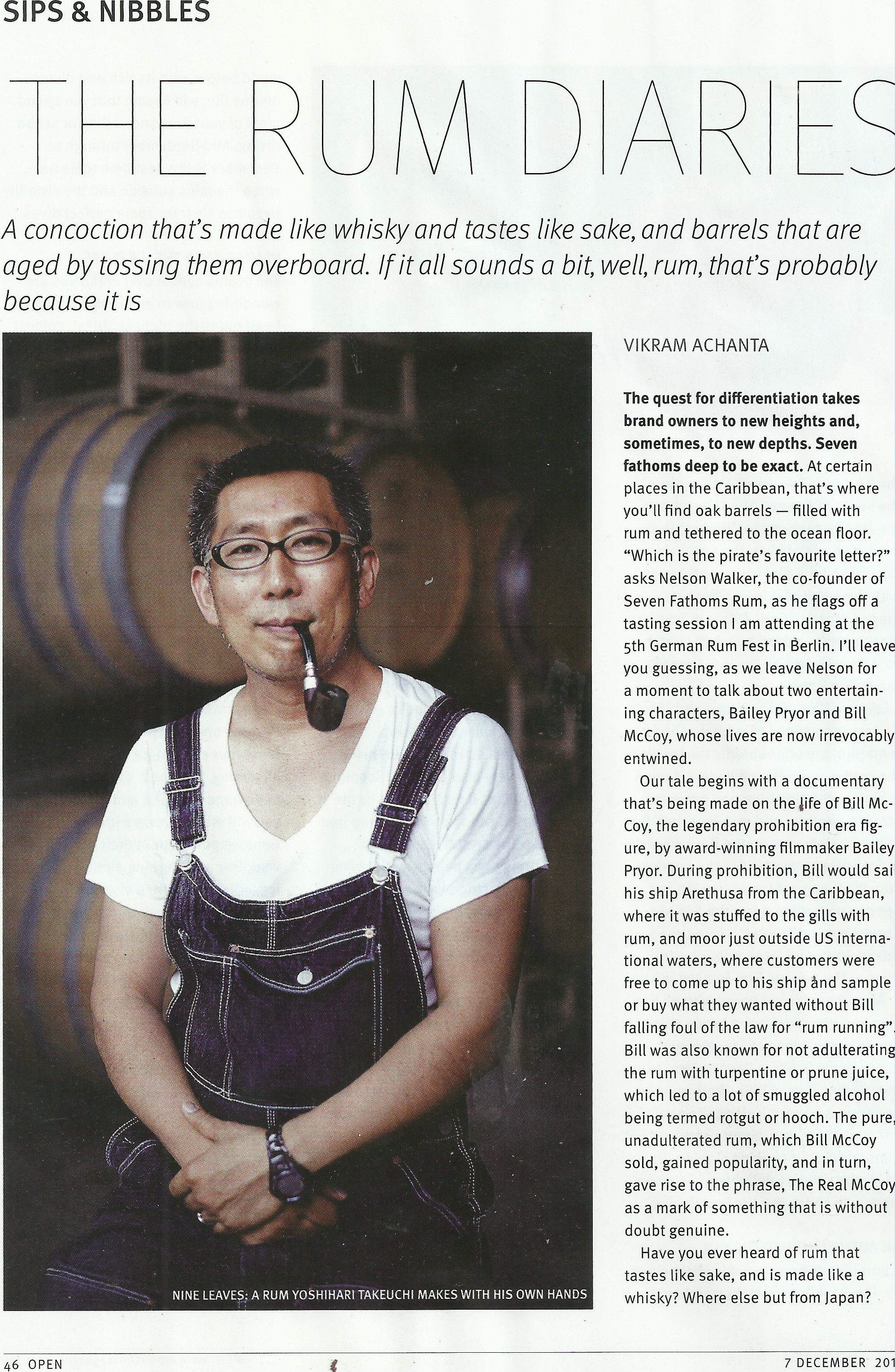 Have you ever heard of rum that tastes like sake, and is made like a whisky? Where else but from Japan? The rum diaries.

A concoction that’s made like whisky and tastes like sake, and barrels that are aged by tossing them overboard. If it all sounds a bit, well, rum, that’s probably because it is!

The quest for differentiation takes brand owners to new heights and, sometimes, to new depths. Seven fathoms deep to be exact. At certain places in the Caribbean, that’s where you’ll find oak barrels — filled with rum and tethered to the ocean floor. “Which is the pirate’s favourite letter?” asks Nelson Walker, the co-founder of Seven Fathoms Rum, as he flags off a tasting session I am attending at the 5th German Rum Fest in Berlin. I’ll leave you guessing, as we leave Nelson for a moment to talk about two entertaining characters, Bailey Pryor and Bill McCoy, whose lives are now irrevocably entwined.

Our tale begins with a documentary that’s being made on the life of Bill McCoy, the legendary prohibition era figure, by award-winning filmmaker Bailey Pryor. During prohibition, Bill would sail his ship Arethusa from the Caribbean, where it was stuffed to the gills with rum, and moor just outside US international waters, where customers were free to come up to his ship and sample or buy what they wanted without Bill falling foul of the law for “rum running”. Bill was also known for not adulterating the rum with turpentine or prune juice, which led to a lot of smuggled alcohol being termed rotgut or hooch. The pure, unadulterated rum, which Bill McCoy sold, gained popularity, and in turn, gave rise to the phrase, The Real McCoy, as a mark of something that is without doubt genuine.

A concoction that’s made like whisky and tastes like sake, and barrels that are aged by tossing them overboard. If it all sounds a bit, well, rum, that’s probably because it is. ‘Sincerely made, Rum from Japan’ is the tagline of Nine Leaves Rum, the brainchild of Yoshiharu Takeuchi, an exile from Japan’s automotive industry. Takeuchi san was very clear that he wanted to create something unique. So unique that he makes the rum with his own hands. As a result, his distillery is on holiday today, as he is with us in Berlin to evangelize.

The pirate’s favorite letter, in case you’re still guessing, is ‘C’ (get it!). It struck Walker and Nelson, the co-founders of Seven Fathoms that, back in the days, rum used to be transported by sea, below decks. The casks were in a constant state of agitation, the rum always moving around the barrel, which played a definite role in developing the character of the liquor. To get the same effect, they began to experiment by aging casks underwater, until a diver one day found out what they were up to and took a cask up to the surface. With their secret now out, they began their venture in earnest, tethering their casks to the ocean floor, the barrels agitated by ocean movements. They found, says Nelson, that one to three years under- water is the same as five to seven years on land.

Nelson is also experimenting with aging casks at greater depths, and friendly oceanic research vessels (no doubt paid for in rum) are dropping casks as deep as 20 fathoms. A diving helmet is the big, bold logo on the bottles, and whether the underwater aging is a marketing gimmick or not, the rum tastes delicious. I ask nelson what the Angel’s Share (alcohol evaporation from casks) is underwater. “It’s about 4 per cent a year” he says, “Let’s call it the Mermaid’s Share.” (Angel’s Share is the term in Scotch.)

During the course of Bailey’s research into Bill McCoy, he tracked down the burial places of Bill’s two siblings but could not find Bill’s grave. He came to the conclusion that Bill was probably buried, you guessed it, at sea. Inspired by Bill’s story, Bailey decided to pay homage to this legendary figure in the best way possible — by making a rum in his name. He tied up with the Four Square distillery on the island of Barbados, which uses a mix of column and pot stills to craft a high quality range of rums, from a three-year white rum to a five-year dark rum, and then the crown jewel, a 12-year dark. Those of you who find Bill’s story stranger than fiction are not alone. Hollywood’s on your side; and Chris Pratt is slated to play the role of Bill McCoy in an upcoming movie called… The Real McCoy.

Cut to Takeuchi San. He double distills his rum in pot stills imported from Scotland. He sources all his ingredients from Japan, including the sugarcane (from Okinawa) and spring water (from an underground source). The nine Leaves rum derives its name from the leaves featured on his family’s crest. He has a short but potent line-up, starting with clear rum that tastes like no other white rum I’ve ever had, and ending with rum aged for a year in red wine casks from Napa Valley. In the middle are two more dark rums. When I ask him what the difference is, he gives me a reply I’ve never heard before: ‘The one aged in French oak barrels is ‘Madame’ and the one in American oak is ‘Mademoiselle’!

(Vikram Achanta is the co-founder of Tulleeho.com, a liquor website and Tulleeho, a liquor training and consulting firm.)

Link to the article: http://www.openthemagazine.com/open-avenues/luxury/sips-nibble-the-rum-diaries